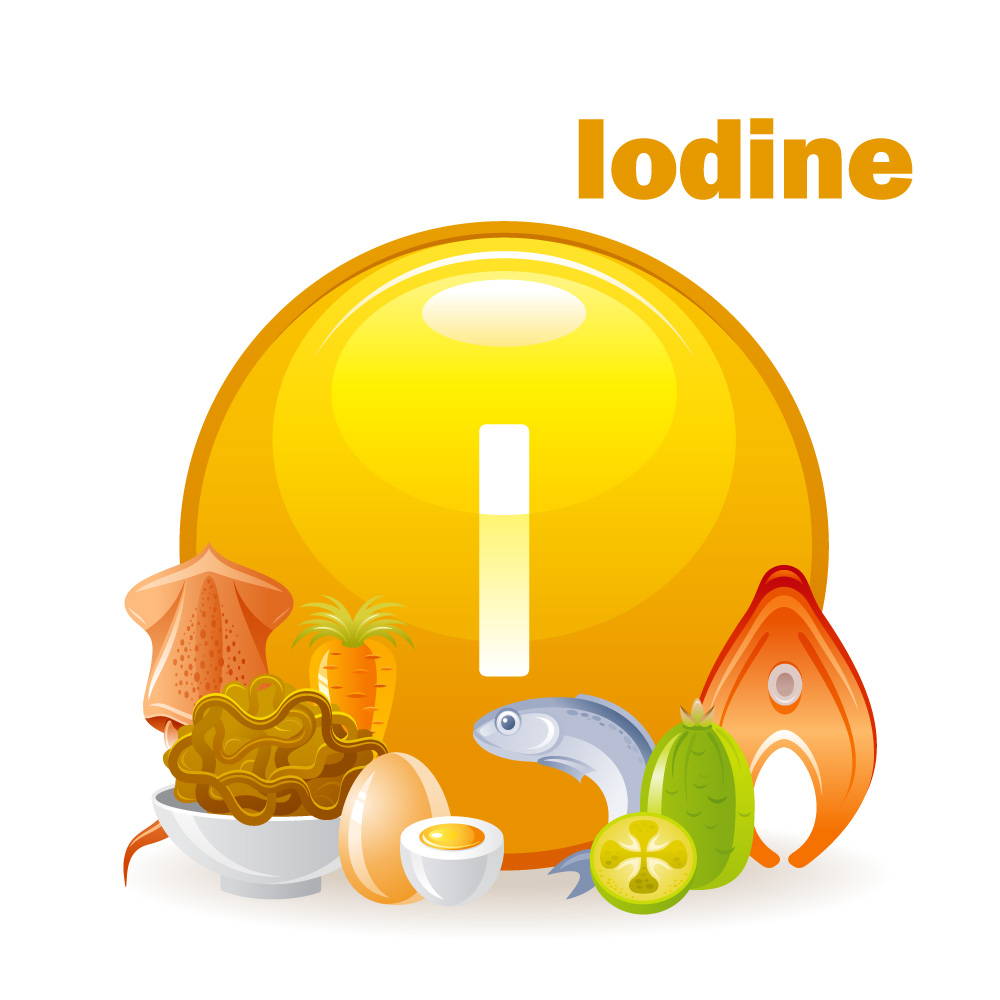 What is iodine and what does it do?

Iodine is a mineral found in some foods. The body needs iodine to make thyroid hormones. These hormones control the body’s metabolism and many other important functions. The body also needs thyroid hormones for proper bone and brain development during pregnancy and infancy. Getting enough iodine is important for everyone, especially infants and women who are pregnant.
Iodine is a trace element that is naturally present in some foods, is added to some types of salt, and is available as a dietary supplement. Iodine is an essential component of the thyroid hormones thyroxine (T4) and triiodothyronine (T3). Thyroid hormones regulate many important biochemical reactions, including protein synthesis and enzymatic activity, and are critical determinants of metabolic activity [1,2]. They are also required for proper skeletal and central nervous system development in fetuses and infants [1].
Thyroid function is primarily regulated by thyroid-stimulating hormone (TSH), also known as thyrotropin. It is secreted by the pituitary gland to control thyroid hormone production and secretion, thereby protecting the body from hypothyroidism and hyperthyroidism [1]. TSH secretion increases thyroidal uptake of iodine and stimulates the synthesis and release of T3 and T4. In the absence of sufficient iodine, TSH levels remain elevated, leading to goiter, an enlargement of the thyroid gland that reflects the body’s attempt to trap more iodine from the circulation and produce thyroid hormones. Iodine may have other physiological functions in the body as well. For example, it appears to play a role in immune response and might have a beneficial effect on mammary dysplasia and fibrocystic breast disease [2].
The earth’s soils contain varying amounts of iodine, which in turn affects the iodine content of crops. In some regions of the world, iodine-deficient soils are common, increasing the risk of iodine deficiency among people who consume foods primarily from those areas. Salt iodization programs, which many countries have implemented, have dramatically reduced the prevalence of iodine deficiency worldwide [2,3].
Iodine in food and iodized salt is present in several chemical forms including sodium and potassium salts, inorganic iodine (I2), iodate, and iodide, the reduced form of iodine [4]. Iodine rarely occurs as the element, but rather as a salt; for this reason, it is referred to as iodide and not iodine. Iodide is quickly and almost completely absorbed in the stomach and duodenum. Iodate is reduced in the gastrointestinal tract and absorbed as iodide [2,5]. When iodide enters the circulation, the thyroid gland concentrates it in appropriate amounts for thyroid hormone synthesis and most of the remaining amount is excreted in the urine [2]. The iodine-replete healthy adult has about 15–20 mg of iodine, 70%–80% of which is contained in the thyroid [6].

How much iodine do I need?

The amount of iodine you need each day depends on your age. Average daily recommended amounts are listed below in micrograms (mcg).

What happens if I don’t get enough iodine?

What are some effects of iodine on health?

Scientists are studying iodine to understand how it affects health. Here are some examples of what this research has shown.

Women who are pregnant or breastfeeding need to get enough iodine for their babies to grow and develop properly. Breastfed infants get iodine from breast milk. However, the iodine content of breast milk depends on how much iodine the mother gets.

To make adequate amounts of iodine available for proper fetal and infant development, several national and international groups recommend that pregnant and breastfeeding women and infants take iodine supplements. The American Thyroid Association recommends that women who are pregnant, planning to become pregnant, or breastfeeding take a daily supplement containing 150 mcg iodine as potassium iodide. The American Academy of Pediatrics has similar guidance. However, only about half the prenatal multivitamins sold in the United States contain iodine.

Although not harmful, fibrocystic breast disease causes lumpy, painful breasts. It mainly affects women of reproductive age but can also occur during menopause. Very high doses of iodine supplements might reduce the pain and other symptoms of fibrocystic breast disease, but more study is necessary to confirm this. Check with your healthcare provider before taking iodine for this condition, especially because iodine can be unsafe at high doses.

Can iodine be harmful?

Yes, if you get too much. Getting high levels of iodine can cause some of the same symptoms as iodine deficiency, including goiter (an enlarged thyroid gland). High iodine intakes can also cause thyroid gland inflammation and thyroid cancer. Getting a very large dose of iodine (several grams, for example) can cause burning of the mouth, throat, and stomach; fever; stomach pain; nausea; vomiting; diarrhea; weak pulse; and coma.
The daily upper limits for iodine include intakes from all sources—food, beverages, and supplements—and are listed below. These levels do not apply to people who are taking iodine for medical reasons under the care of a doctor.

Where can I find out more about iodine?