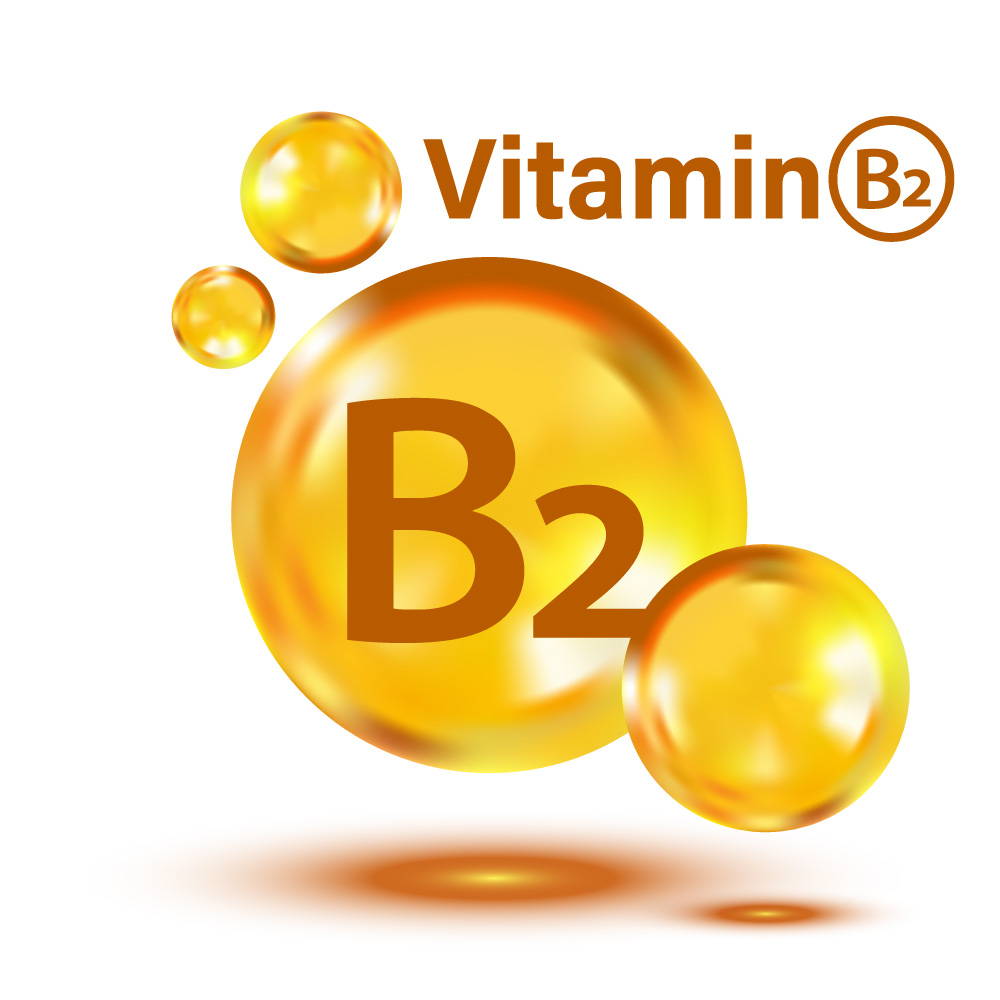 What is Riboflavin and what does it do?

Riboflavin (also called vitamin B2) is important for the growth, development, and function of the cells in your body. It also helps turn the food you eat into the energy you need.
Riboflavin (also known as vitamin B2) is one of the B vitamins, which are all water soluble. Riboflavin is naturally present in some foods, added to some food products, and available as a dietary supplement. This vitamin is an essential component of two major coenzymes, flavin mononucleotide (FMN; also known as riboflavin-5’-phosphate) and flavin adenine dinucleotide (FAD). These coenzymes play major roles in energy production; cellular function, growth, and development; and metabolism of fats, drugs, and steroids [1-3]. The conversion of the amino acid tryptophan to niacin (sometimes referred to as vitamin B3) requires FAD [3]. Similarly, the conversion of vitamin B6 to the coenzyme pyridoxal 5’-phosphate needs FMN. In addition, riboflavin helps maintain normal levels of homocysteine, an amino acid in the blood [1].
More than 90% of dietary riboflavin is in the form of FAD or FMN; the remaining 10% is comprised of the free form and glycosides or esters [2,3]. Most riboflavin is absorbed in the proximal small intestine [4]. The body absorbs little riboflavin from single doses beyond 27 mg and stores only small amounts of riboflavin in the liver, heart, and kidneys. When excess amounts are consumed, they are either not absorbed or the small amount that is absorbed is excreted in urine [3].
Bacteria in the large intestine produce free riboflavin that can be absorbed by the large intestine in amounts that depend on the diet. More riboflavin is produced after ingestion of vegetable-based than meat-based foods [2].
Riboflavin is yellow and naturally fluorescent when exposed to ultraviolet light [1]. Moreover, ultraviolet and visible light can rapidly inactivate riboflavin and its derivatives. Because of this sensitivity, lengthy light therapy to treat jaundice in newborns or skin disorders can lead to riboflavin deficiency. The risk of riboflavin loss from exposure to light is the reason why milk is not typically stored in glass containers [3,5].

How much Riboflavin do I need?

The amount of riboflavin you need depends on your age and sex. Average daily recommended amounts are listed below in milligrams (mg).

What happens if I don’t get enough Riboflavin?

You can develop riboflavin deficiency if you don’t get enough riboflavin in the foods you eat, or if you have certain diseases or hormone disorders.

Riboflavin deficiency can cause skin disorders, sores at the corners of your mouth, swollen and cracked lips, hair loss, sore throat, liver disorders, and problems with your reproductive and nervous systems.

Severe, long-term riboflavin deficiency causes a shortage of red blood cells (anemia), which makes you feel weak and tired. It also causes clouding of the lens in your eyes (cataracts), which affects your vision.

What is an effect of Riboflavin supplements on health?

Scientists are studying riboflavin to better understand how it affects health. Here is an example of what this research has shown.

Can Riboflavin be harmful?

Riboflavin has not been shown to cause any harm.

Where can I find out more about Riboflavin?