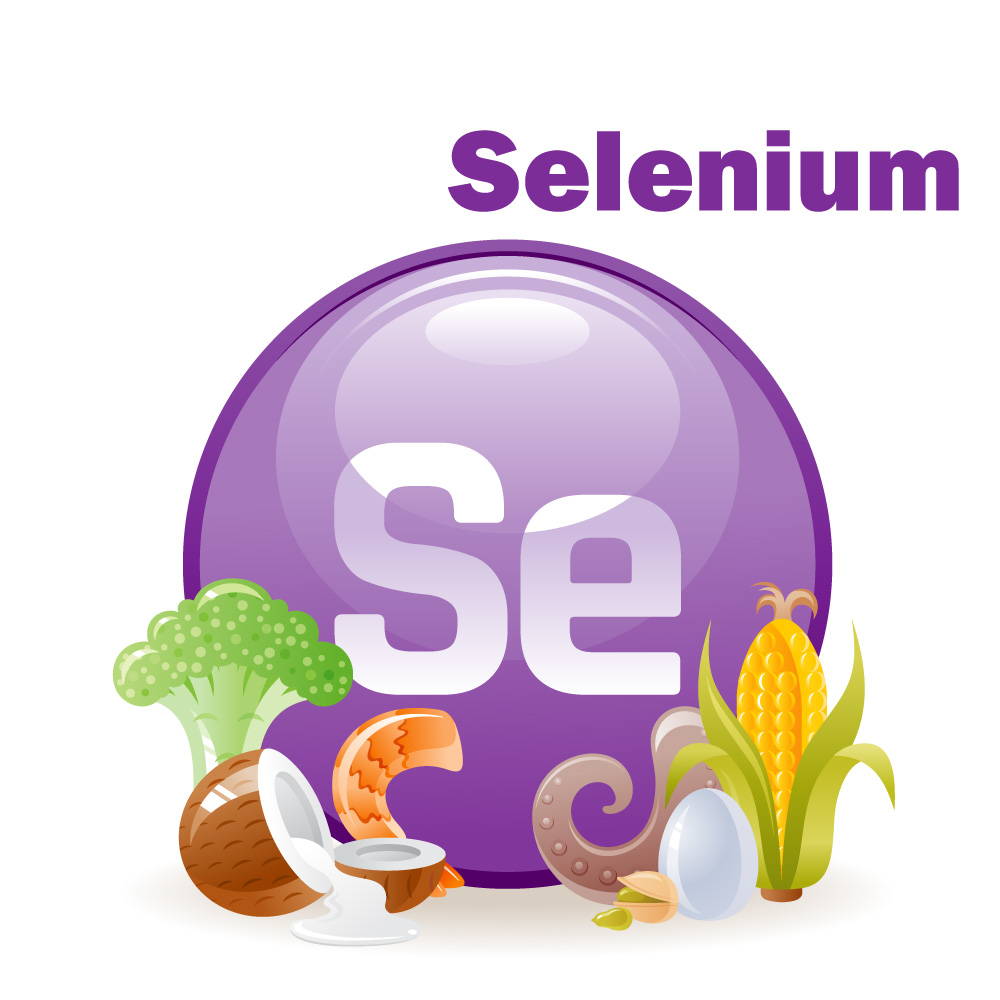 What is selenium and what does it do?

Selenium is a nutrient that the body needs to stay healthy. Selenium is important for reproduction, thyroid gland function, DNA production, and protecting the body from damage caused by free radicals and from infection.
Selenium is a trace element that is naturally present in many foods, added to others, and available as a dietary supplement. Selenium, which is nutritionally essential for humans, is a constituent of more than two dozen selenoproteins that play critical roles in reproduction, thyroid hormone metabolism, DNA synthesis, and protection from oxidative damage and infection [1].
Selenium exists in two forms: inorganic (selenate and selenite) and organic (selenomethionine and selenocysteine) [2]. Both forms can be good dietary sources of selenium [3]. Soils contain inorganic selenites and selenates that plants accumulate and convert to organic forms, mostly selenocysteine and selenomethionine and their methylated derivatives.
Most selenium is in the form of selenomethionine in animal and human tissues, where it can be incorporated nonspecifically with the amino acid methionine in body proteins. Skeletal muscle is the major site of selenium storage, accounting for approximately 28% to 46% of the total selenium pool [3]. Both selenocysteine and selenite are reduced to generate hydrogen selenide, which in turn is converted to selenophosphate for selenoprotein biosynthesis [4].

How much selenium do I need?

The amount of selenium that you need each day depends on your age. Average daily recommended amounts are listed below in micrograms (mcg).

What happens if I don’t get enough selenium?

Selenium deficiency is very rare in the United States and Canada. Selenium deficiency can cause Keshan disease (a type of heart disease) and male infertility. It might also cause Kashin-Beck disease, a type of arthritis that produces pain, swelling, and loss of motion in your joints.

What are some effects of selenium on health?

Scientists are studying potassium to understand how it affects health. Here are some examples of what this research has shown.

Studies suggest that people who consume lower amounts of selenium could have an increased risk of developing cancers of the colon and rectum, prostate, lung, bladder, skin, esophagus, and stomach. But whether selenium supplements reduce cancer risk is not clear. More research is needed to understand the effects of selenium from food and dietary supplements on cancer risk.

Scientists are studying whether selenium helps reduce the risk of cardiovascular disease. Some studies show that people with lower blood levels of selenium have a higher risk of heart disease, but other studies do not. More studies are needed to better understand how selenium in food and dietary supplements affects heart health.

The thyroid gland has high amounts of selenium that play an important role in thyroid function. Studies suggest that people—especially women—who have low blood levels of selenium (and iodine) might develop problems with their thyroid. But whether selenium dietary supplements can help treat or reduce the risk of thyroid disease is not clear. More research is needed to understand the effects of selenium on thyroid disease.

Can selenium be harmful?

Yes, if you get too much. Brazil nuts, for example, contain very high amounts of selenium (68–91 mcg per nut) and can cause you to go over the upper limit if you eat too many. Getting too much selenium over time can cause the following:
Extremely high intakes of selenium can cause severe problems, including difficulty breathing, tremors, kidney failure, heart attacks, and heart failure.
The daily upper limits for selenium include intakes from all sources—food, beverages, and supplements—and are listed below.

Where can I find out more about selenium?