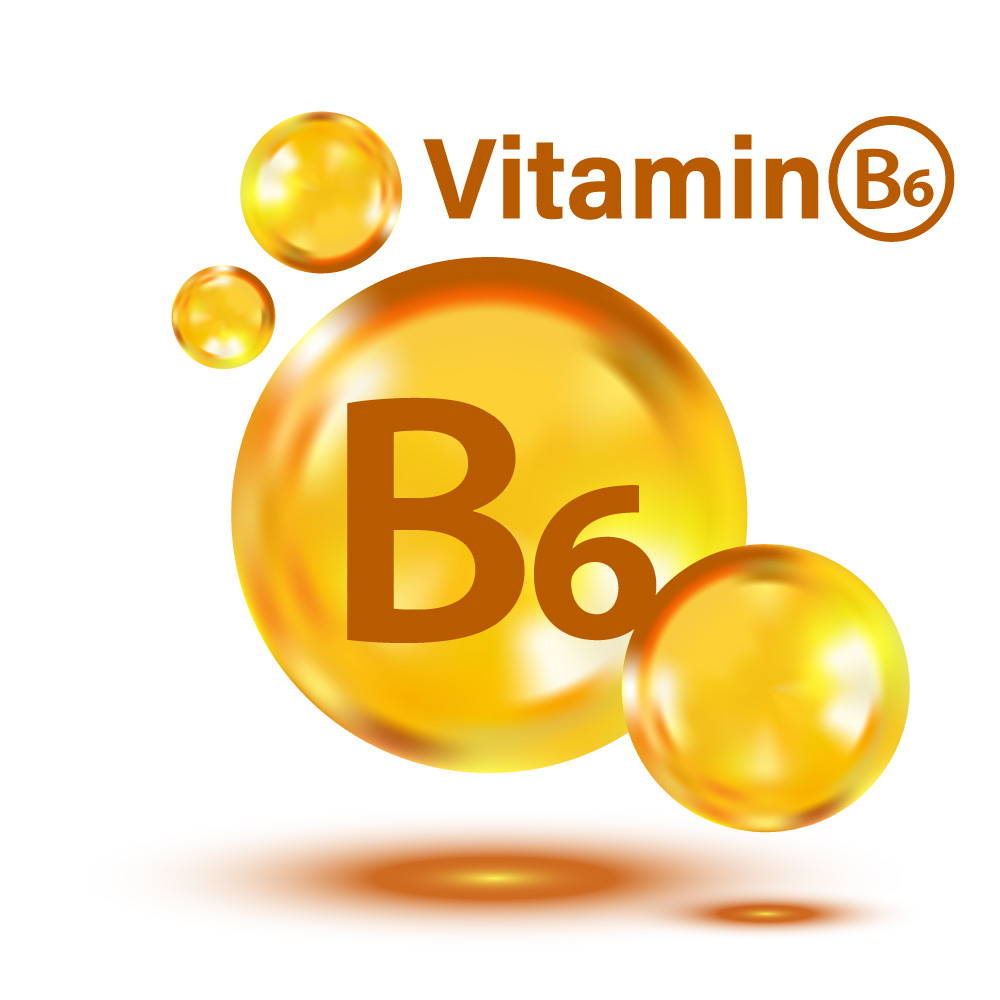 What is vitamin B6 and what does it do?

Vitamin B6 is a vitamin that is naturally present in many foods. The body needs vitamin B6 for more than 100 enzyme reactions involved in metabolism. Vitamin B6 is also involved in brain development during pregnancy and infancy as well as immune function.
Vitamin B6 is a water-soluble vitamin that is naturally present in many foods, added to others, and available as a dietary supplement. It is the generic name for six compounds (vitamers) with vitamin B6 activity: pyridoxine, an alcohol; pyridoxal, an aldehyde; and pyridoxamine, which contains an amino group; and their respective 5’-phosphate esters. Pyridoxal 5’ phosphate (PLP) and pyridoxamine 5’ phosphate (PMP) are the active coenzyme forms of vitamin B6 [1,2].
Vitamin B6 in coenzyme forms performs a wide variety of functions in the body and is extremely versatile, with involvement in more than 100 enzyme reactions, mostly concerned with protein metabolism [1]. Both PLP and PMP are involved in amino acid metabolism, and PLP is also involved in the metabolism of one-carbon units, carbohydrates, and lipids [3]. Vitamin B6 also plays a role in cognitive development through the biosynthesis of neurotransmitters and in maintaining normal levels of homocysteine, an amino acid in the blood [3]. Vitamin B6 is involved in gluconeogenesis and glycogenolysis, immune function (for example, it promotes lymphocyte and interleukin-2 production), and hemoglobin formation [3].
The human body absorbs vitamin B6 in the jejunum. Phosphorylated forms of the vitamin are dephosphorylated, and the pool of free vitamin B6 is absorbed by passive diffusion [2].

How much vitamin B6 do I need?

The amount of vitamin B6 you need depends on your age. Average daily recommended amounts are listed below in milligrams (mg).

What happens if I don’t get enough vitamin B6?

Vitamin B6 deficiency is uncommon in the United States. People who don’t get enough vitamin B6 can have a range of symptoms, including anemia, itchy rashes, scaly skin on the lips, cracks at the corners of the mouth, and a swollen tongue. Other symptoms of very low vitamin B6 levels include depression, confusion, and a weak immune system. Infants who do not get enough vitamin B6 can become irritable or develop extremely sensitive hearing or seizures.

What are some effects of vitamin B6 on health?

Scientists are studying vitamin B6 to understand how it affects health. Here are some examples of what this research has shown.

People with low levels of vitamin B6 in the blood might have a higher risk of certain kinds of cancer, such as colorectal cancer. But studies to date have not shown that vitamin B6 supplements can help prevent cancer or lower the chances of dying from this disease.

Some scientists had thought that certain B vitamins (such as folic acid, vitamin B12, and vitamin B6) might reduce cardiovascular disease risk by lowering levels of homocysteine, an amino acid in the blood. Although vitamin B supplements do lower blood homocysteine, research shows that they do not actually reduce the risk or severity of heart disease or stroke.

Some research indicates that elderly people who have higher blood levels of vitamin B6 have better memory. However, taking vitamin B6 supplements (alone or combined with vitamin B12 and/or folic acid) does not seem to improve cognitive function or mood in healthy people or in people with dementia.

Scientists aren’t yet certain about the potential benefits of taking vitamin B6 for premenstrual syndrome (PMS). But some studies show that vitamin B6 supplements could reduce PMS symptoms, including moodiness, irritability, forgetfulness, bloating, and anxiety.

At least half of all women experience nausea, vomiting, or both in the first few months of pregnancy. Based on the results of several studies, the American Congress of Obstetricians and Gynecologists (ACOG) recommends taking vitamin B6 supplements under a doctor’s care for nausea and vomiting during pregnancy.

Can vitamin B6 be harmful?

People almost never get too much vitamin B6 from food or beverages. But taking high levels of vitamin B6 from supplements for a year or longer can cause severe nerve damage, leading people to lose control of their bodily movements. The symptoms usually stop when they stop taking the supplements. Other symptoms of too much vitamin B6 include painful, unsightly skin patches, extreme sensitivity to sunlight, nausea, and heartburn.
The daily upper limits for vitamin B6 include intakes from all sources—food, beverages, and supplements—and are listed below. These levels do not apply to people who are taking vitamin B6 for medical reasons under the care of a doctor.

Where can I find out more about vitamin B6?

• For general information on vitamin B6:
o Office of Dietary Supplements Health Professional Fact Sheet on Vitamin B6
o Vitamin B6 , MedlinePlus®
• For more information on food sources of vitamin B6:
o U.S. Department of Agriculture’s (USDA's) FoodData Central
o Nutrient List for vitamin B6 (listed by food or by vitamin B6 content), USDA
• For more advice on choosing dietary supplements:
o Office of Dietary Supplements Frequently Asked Questions: Which brand(s) of dietary supplements should I purchase?
• For information about building a healthy dietary pattern:
o MyPlate
o Dietary Guidelines for Americans