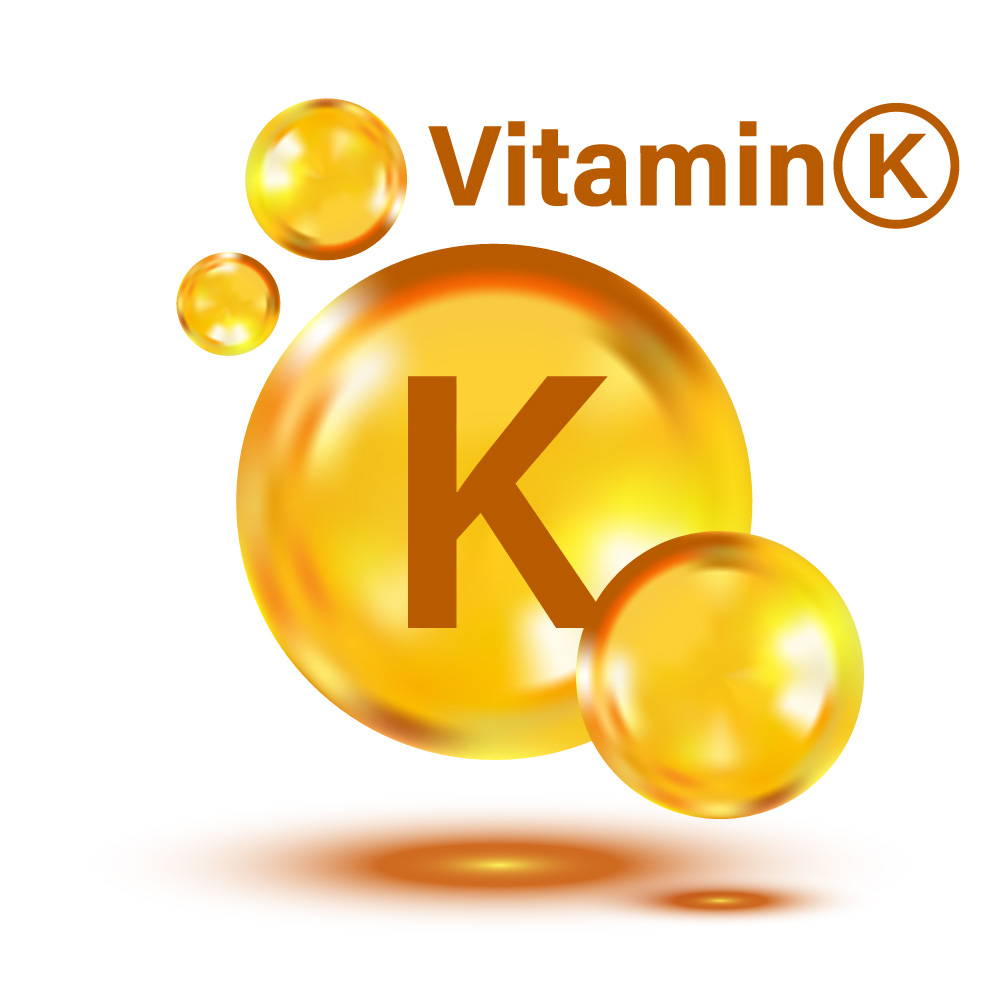 What is vitamin K and what does it do?

Vitamin K is a nutrient that the body needs to stay healthy. It’s important for blood clotting and healthy bones and also has other functions in the body. If you are taking a blood thinner such as warfarin (Coumadin®), it’s very important to get about the same amount of vitamin K each day.
“Vitamin K,” the generic name for a family of compounds with a common chemical structure of 2-methyl-1,4-naphthoquinone, is a fat-soluble vitamin that is naturally present in some foods and is available as a dietary supplement [1]. These compounds include phylloquinone (vitamin K1) and a series of menaquinones (vitamin K2) [2]. Menaquinones have unsaturated isoprenyl side chains and are designated as MK-4 through MK-13, based on the length of their side chain [1,2]. MK-4, MK-7, and MK-9 are the most well-studied menaquinones.
Phylloquinone is present primarily in green leafy vegetables and is the main dietary form of vitamin K [3]. Menaquinones, which are predominantly of bacterial origin, are present in modest amounts in various animal-based and fermented foods [1,4]. Almost all menaquinones, in particular the long-chain menaquinones, are also produced by bacteria in the human gut [5,6]. MK-4 is unique in that it is produced by the body from phylloquinone via a conversion process that does not involve bacterial action [7].
Vitamin K functions as a coenzyme for vitamin K-dependent carboxylase, an enzyme required for the synthesis of proteins involved in hemostasis (blood clotting) and bone metabolism, and other diverse physiological functions [3,5]. Prothrombin (clotting factor II) is a vitamin K-dependent protein in plasma that is directly involved in blood clotting. Warfarin (Coumadin®) and some anticoagulants used primarily in Europe antagonize the activity of vitamin K and, in turn, prothrombin [8]. For this reason, individuals who are taking these anticoagulants need to maintain consistent vitamin K intakes.
Matrix Gla-protein, a vitamin K-dependent protein present in vascular smooth muscle, bone, and cartilage, is the focus of considerable scientific research because it might help reduce abnormal calcification [9]. Osteocalcin is another vitamin K-dependent protein that is present in bone and may be involved in bone mineralization or turnover [5].
Like dietary lipids and other fat-soluble vitamins, ingested vitamin K is incorporated into mixed micelles via the action of bile and pancreatic enzymes, and it is absorbed by enterocytes of the small intestine [10]. From there, vitamin K is incorporated into chylomicrons, secreted into the lymphatic capillaries, transported to the liver, and repackaged into very low-density lipoproteins [2,10]. Vitamin K is present in the liver and other body tissues, including the brain, heart, pancreas, and bone [2,3,11].
In the circulation, vitamin K is carried mainly in lipoproteins [2]. Compared to the other fat-soluble vitamins, very small amounts of vitamin K circulate in the blood. Vitamin K is rapidly metabolized and excreted. Based on phylloquinone measurements, the body retains only about 30% to 40% of an oral physiological dose, while about 20% is excreted in the urine and 40% to 50% in the feces via bile [2,11]. This rapid metabolism accounts for vitamin K’s relatively low blood levels and tissue stores compared to those of the other fat-soluble vitamins [11].
Little is known about the absorption and transport of vitamin K produced by gut bacteria, but research indicates that substantial quantities of long-chain menaquinones are present in the large bowel [7]. Although the amount of vitamin K that the body obtains in this manner is unclear, experts believe that these menaquinones satisfy at least some of the body’s requirement for vitamin K [6,7].
All our products contain as the form of MK-7(Menaquinone-7), most active and useful form of Vitamin K on our body.

How much vitamin K do I need?

The amount of vitamin K you need depends on your age and sex. Average daily recommended amounts are listed below in micrograms (mcg).

What happens if I don’t get enough vitamin K?

What are some effects of vitamin K on health?

Scientists are studying vitamin K to understand how it affects our health. Here are some examples of what this research has shown.

Vitamin K is important for healthy bones. Some research shows that people who eat more vitamin K-rich foods have stronger bones and are less likely to break a hip than those who eat less of these foods. A few studies have found that taking vitamin K supplements improves bone strength and the chances of breaking a bone, but other studies have not. More research is needed to better understand if vitamin K supplements can help improve bone health and reduce osteoporosis risk.

Where can I find out more about vitamin K?